This week's posting is prompted by a hilarious online article: One-Star Amazon Reviews of Beloved Children's Books. Just goes to show that even the classics get panned and you can't please everyone.

Here's a couple of samples: 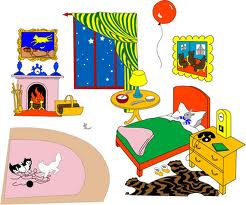 Goodnight Moon:
"If you want to bring up your children to love God or at least acknowledge the existence of things that are not part of the physical world, things such as love, spirituality, truth, etc. I think you'll find the page which says 'goodnight nobody' a bit jarring....."

Where the Wild Things Are:
"I cannot believe this book is a best seller. Max, the protagonist, is a wild, rude, annoying, little snot-nosed monster. The last thing I want is for my child to model her behavior after him! My daughter received this as a gift and it is now in the trash because I could not bring myself to give it away to another child."

This got me to thinking: what other classic children's books have been "dissed" by one star on Amazon? Oh yes Virginia, there are more! 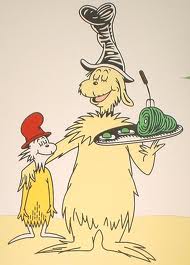 Green Eggs and Ham:
"This book is SOOOOOOOO annoying! What's the deal with all the rhyming? That got on my last nerve. I can't believe this book is a children's "classic". This book does for childrens' books what Jim Jones did for children's drinks (kool-aid, that is). If you want a GREAT children's book, try "Atlas Shrugged" the pop-up book by Ayn Rand."

Blueberries for Sal:
"I don't understand the positive reviews here or the caldecott award. The sketchings are artistically done, true, but in a way an adult can appreciate intellectually; they don't really evoke emotion. The story is a yawner."

Harold and the Purple Crayon:
"Harold's messy adventures have resulted in a lot of pain and suffering in my household. Purple crayon everywhere. You could say the blame falls on me for leaving purple crayons in easily accessible areas of the house, but I prefer to blame a children's book. Harold seems to be a stand up little fellow, but I shant be purchasing any more Harold adventures that involve colored paraffin wax." 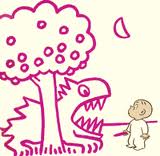 Snowy Day:
"My wife bought this book for our 9month old son. He doesn't understand it but likes to hear stories. I won't read this to him any longer. Simply put this book is strange and doesn't have any redeeming value as children's literature. I honestly found it to be a little creepy."

Mike Mulligan and his Steam Shovel:
"The steam-shovel is personified enough in the book, and at the age I was introduced to this book, I had a fuzzier concept of animate vs inanimate. The ending... living forever in a basement, immobile, was hellish. I cried in horror at the steam-shovel's fate. While I wouldn't recommend this book to any child, I would be especially cautious if the child has demonstrated any interest in construction machinery."

Ferdinand the Bull:
"I bought this for my 4 year old son because my husband said it was his favorite book growing up. Well, this book was only one of his many problems from childhood. First of all, it speaks of the violence brought on a bull in a bull-fight (not appropriate for young kids in my opinion). The worst part, however, is the ineptitude of Ferdinand. He is a big, strong bull not at all interested in being what he is. He is lazy and just wants to look at flowers. He is a waste. I cannot fathom how anyone finds the story endearing..." 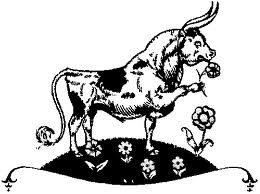 Okay, I made my point. Nearly all the books I looked up had at least one person who couldn't fathom the book, found it boring, illustrations amateur, politically offensive etc. It's actually kind of funny when you see all these one-star ratings in a collection. It's an almost addictive research process...endearing and weirdly amusing!
Posted by cindy at 5:25 PM 2 comments:

Email ThisBlogThis!Share to TwitterShare to FacebookShare to Pinterest
Labels: Amazon, Blueberries for Sal, Ferdinand the Bull, Green Eggs and Ham, Harold and the Purple Crayon, Mike Mulligan and his Steam Shovel, Snowy Day, Where the Wild Things Are

In honor of Illustration Friday I'm posting today, even though I'm usually a Monday/Tuesday blogger. But that's okay since I missed this week! And I'm trying to get back into sketching regularly, so this works for me.
This past week's topic on Illustration Friday was "Ocean", and I have an older piece that I thought I'd share.
My style has evolved since this piece was done, from watercolor to gouache and/or acrylic.Though I was never comfortable using watercolor, I was somewhat happy with this piece. It was for an assignment at RISD and the text involved a boy being afraid of the ocean. Images immediately came to mind and this is one of them. 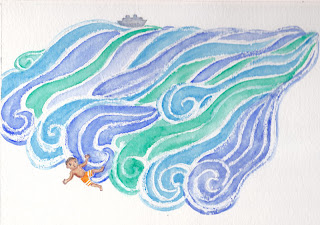 Starting today on Illustration Friday, the topic is "Myth". That might be harder, since I don't typically do myth... but hey, there's a first time for everything!