Maurice has been on my mind lately. Through another blog, I became aware of "Sendakifying" wherein some illustrators took a scene from a Sendak book and used the style of another illustrator. How cool I thought, I'll try it. Well, it's harder than it looks. (Maybe it depends on who you're blending with Sendak.... hey I like the sound of that: Blending with Sendak, could be a whole new workshop/trend etc.) I chose Garth Williams, because he's another illustrator who's been on my mind as of late. I got a cool copy of "The Rescuers" by Margery Sharp and was entranced by William's illustrations. 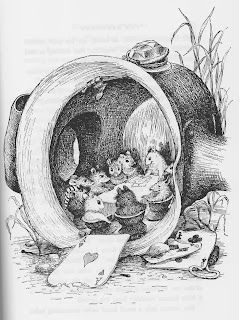 So, who better than to try than Mr. Williams (especially since no one had yet Sendakified him)? It's kind of a psychological as well as technical journey, trying to get inside the head of two illustrators simultaneously. Some people have done an amazing job. Check out Sendak's "BumbleArdy" in the style of Richard Scarry (another fave)..... just hilarious!
Here's a small work-in-progress-- my version of "The Wild Things" a la Garth Williams: 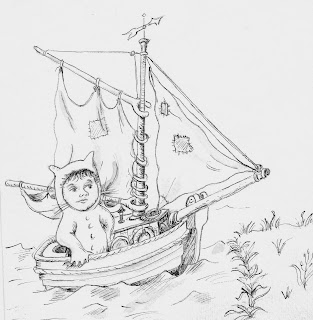 Not well-known fact: Sendak along with his brother Jack wanted to design toys.

And yet another interesting Sendak-related tidbit: "Where the Wild Things Are" was originally "Where the Wild Horses Are" and this blog entry describes how it evolved. I love seeing the behind-the-scenes evolution of a particular book or illustration.
Note to self: get a copy of "The Art of Maurice Sendak"!